For my wife’s 40th birthday, the boys and I wanted to have custom shirts that we could wear to celebrate. I had them each draw a design for the shirt, with the intention of screen printing it onto a t-shirt. Here’s what did and did not go well 🙂

Here’s what we ordered:

I’d looked up tutorials for screen printing beforehand, and had been seduced by promises of “a simpler method of screenprinting.” The simpler method was basically to cut out a stencil and attach that to the screen.

I had the boys draw their designs, then took a picture of it with my phone and used Google Docs’ scan feature to turn it into a PDF. From there I converted it for the laser cutter that we have at work – but it would have been easier and quicker just to cut it out by hand!

So at this point I had a stencil cut out of thick paper, which I taped to the top of the printing screen. I placed it on the t-shirt, with another piece of paper inside the shirt (to stop the ink from seeping through).

I scooped a small amount of ink onto the screen, then scraped it across the stencil.

My first attempt didn’t turn out well – the paper was quite thick, so the ink didn’t make it onto the shirt. The result was a faded and incomplete picture of the stencil.

Attempt 2: Since that shirt was ruined, I turned it over to practice, and this time used more ink and scraped it across more times. Perfection! The picture turned out dark and complete. I was ready for the real deal.

Attempt 3: I moved the stencil onto a fresh shirt, put plenty of ink on the screen, and started scraping. Unfortunately by this point, the paper was saturated with ink, and had weakened, and one of the narrow parts of my stencil tore. The unicorn’s face was ruined! 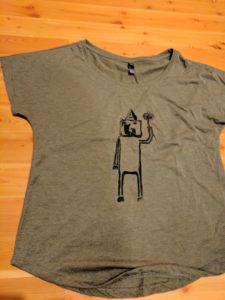 What I’ll do next time

The stencil method isn’t bad. If I did it again, I’d use a more waterproof material. I also don’t think that the screen is necessary for this method – I’m not sure what it accomplishes?

But the proper way of screenprinting, using a photosensitive layer on the screen to make a stencil, actually sounds easier now. I can print my design onto a transparency, and then easily transfer it to the screen using light.

I’ll let you know how it goes 🙂

by mike Posted on May 2, 2017
This entry was posted in make. Bookmark the permalink.